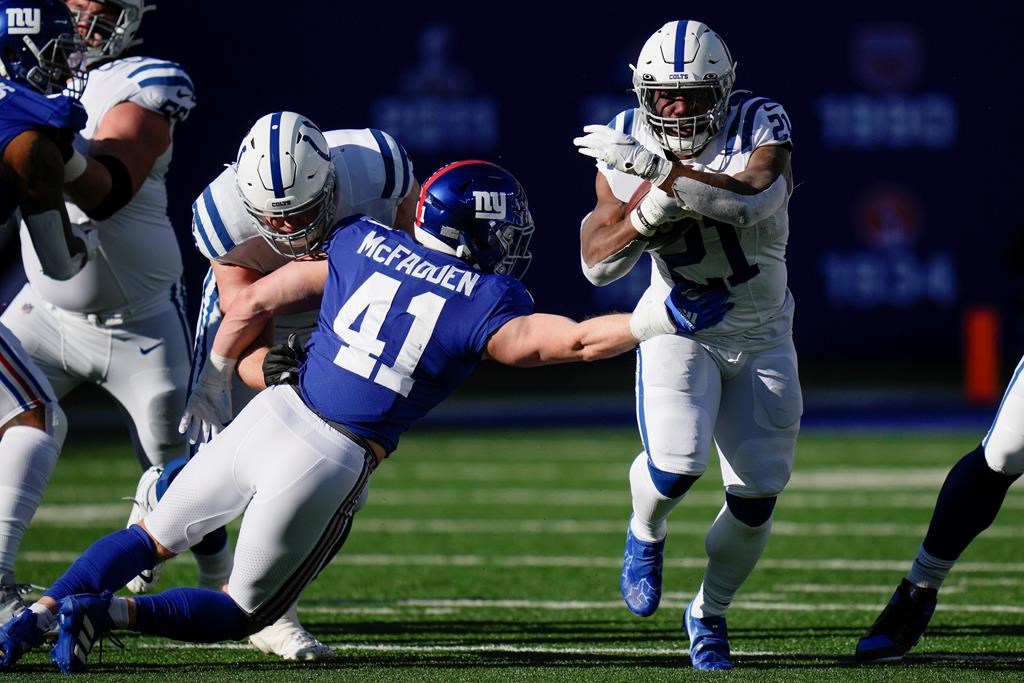 INDIANAPOLIS (AP) — The Indianapolis Colts’ offense has sputtered all season. Now their defense has hit the skids, too.

Despite losing three-time All-Pro linebacker Shaquille Leonard for all but 10 quarters because of injuries, the Colts’ defense was the team’s strength for much of the year. But additional absences to key playmakers coupled with the continual offensive woes have finally taken their toll.

“Losing sucks. I am not a fan of where we are,” interim coach Jeff Saturday said Monday after losing his sixth straight game. “We have not done as well as I had hoped. I knew it was going to be hard. But the frustration doesn’t change. These guys fight, and the results are not good.”

The Colts (4-11-1) have lost their last three to teams clinching playoff berths with those wins. And the last four losses have come in embarrassing fashion — allowing 33 fourth-quarter points at Dallas, watching Minnesota rally from a 33-point halftime deficit to complete the largest comeback in NFL history, an inept prime-time loss to the Los Angeles Chargers and now a 38-10 loss to the New York Giants, which included Giants rookie linebacker Kayvon Thibodeaux celebrating just a few feet away from Nick Foles as the injured quarterback writhed in pain.

The rib injury will keep Foles out of next weekend’s season finale against Houston (2-13-1).

“Tasteless from the celebration afterward,” Saturday said, acknowledging he would talk to his players about reacting differently if it happened again. “Just trash, not a fan of it all. Disappointed from the O-line perspective and from teammates in general. We protect our own.”

Plenty more has gone wrong for the Colts over the last few weeks.

Indy has scored 49 points in the last 13 quarters, given away two defensive scores during that same stretch while enduring a third and now a fourth quarterback change.

Yet the short-handed defense that played so well for so much of this season has become equally culpable for the Colts’ late swoon. Opponents have scored 130 points during those same 13 quarters albeit partly thanks to turnovers and the defense spending too much time on the field.

One game remains before an offseason that promises to be full of changes — moves Saturday and team owner Jim Irsay hope can change the fortunes of this franchise.

Zack Moss. The young running back, acquired at the trade deadline, has emerged as a consistent producer. Since replacing 2021 NFL rushing champ Jonathan Taylor (ankle), Moss has logged 51 carries for 220 yards and looks like he’ll a strong complement to Taylor next fall.

Pass protection. This season-long problem was exposed again at New York, though the numbers weren’t nearly as poor as previous weeks. Indy gave up two sacks, but Foles was under duress so much that Indy generated just 14 first downs and lost Foles for the rest of the season.

DB Dallis Flowers. The 25-year-old undrafted rookie made his first impression as a kick returner. He’s showing he can play defense, too. After recovering a fumble at Minnesota, Flowers had a career-high four tackles Sunday.

Foles. The Colts thought he could jump-start the offense. Instead, six days after taking a career high seven sacks, Foles found himself flat on his back late in the first half and was eventually carted into the locker room. It could be the final chapter of an 11-year career in which he was named Super Bowl MVP after helping Philadelphia claim its first Lombardi Trophy following the 2017 season.

Foles’ absence and Matt Ryan’s demotion will give Sam Ehlinger his fourth start of the season next weekend. CB Brandon Facyson and WR Ashton Dulin are both in the concussion protocol and may not be available for the season finale.

2 — Indy’s offense has scored only two TDs since entering the fourth quarter at Dallas trailing 21-19 on Dec. 4. Opposing defenses, meanwhile, have matched that total during that same span. The Cowboys scored on a fumble return and the Giants scored on an interception return.

There’s not much left for the Colts. Their season fell apart with nine losses in 10 games, multiple quarterback changes, a coaching change and a change in play-callers. Indy has positioned itself for a top-five draft pick, possibly allowing the Colts to find a franchise quarterback. Saturday would like nothing more than to end this skid so he can make a stronger case to keep the coaching job next season.